The Supreme Court today announced its verdict in the landmark case of the Zambian communities consistently polluted by Konkola Copper Mines (KCM), a subsidiary of British miner Vedanta Resources Plc, allowing them to have their case against the parent company and its subsidiary tried in the UK. The ruling sets a strong legal precedent which will allow people with claims against subsidiaries of British multinationals to sue the parent company in the UK.

The judgment by Chief Justice Lady Hale, and four further judges, re-affirms the rulings of the Court of Technology and Construction in 2016 and the Court of Appeal in 2017. Lady Hale refused Vedanta’s pleas in appealing the former judgments stating that, contrary to the claims of Vedanta’s lawyers:

The 1,826 claimants, represented by UK law firm Leigh Day, are from farming and fishing communities downstream of KCM’s mines and plants. They claim to have suffered continual pollution since UK firm Vedanta Resources bought KCM in 2004, including a major incident in 2006 which turned the River Kafue bright blue with copper sulphate and acid, and poisoned water sources for 40,000 people(2). 2,001 claimants took KCM to court in Zambia in 2007. The courts found KCM guilty but denied the communities compensation after a nine year legal battle. As a result the victims took their case to UK lawyers. 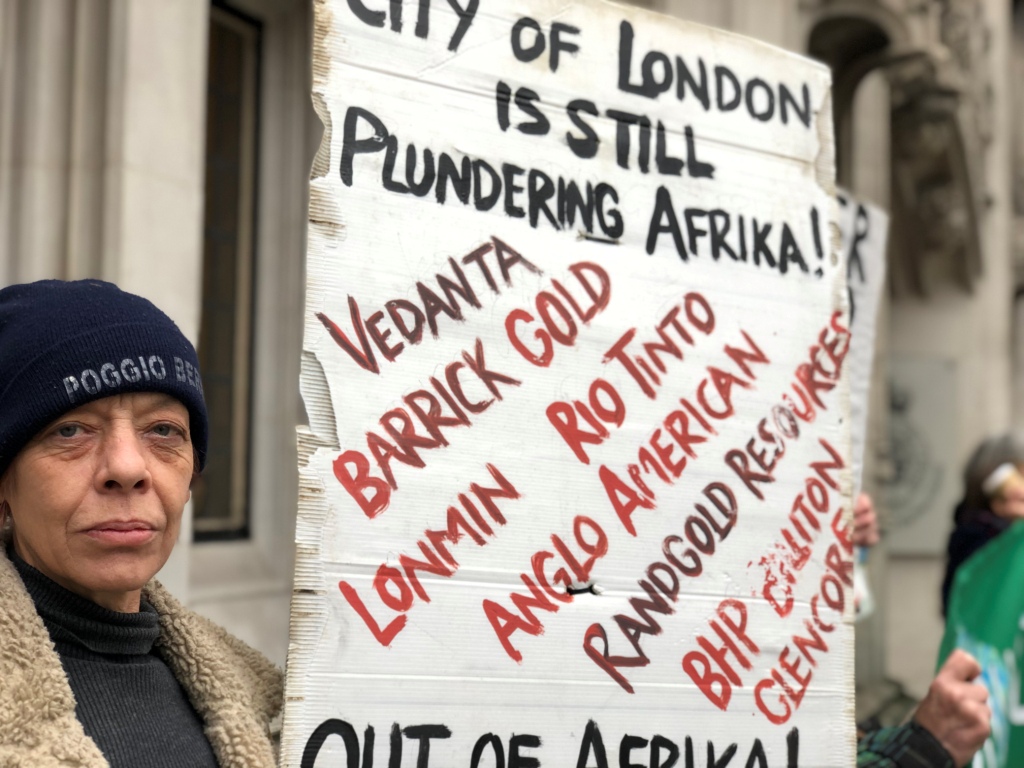 James Nyasulu from Chingola, a long term campaigner in the case, and lead claimant in the Zambian cases, issued this statement:

“The Supreme Court judgment will finally enable justice for the thousands of victims of pollution by KCM’s mining activities, who have suffered immensely since 2006 to date, in the Chingola district of Zambia. Their livelihoods, land and health have been irreparably damaged by pollution which has rendered the River Kafue completely polluted and unable to support aquatic life. Some have already died as a result.

We are very grateful to the British Supreme Court for allowing the case to be tried in the UK where we trust that justice will finally be done. As our thirteen years of legal battles have shown, we have been unable to get justice in Zambia.”

“‘Companies that operate and profit extraterritorially must be accountable extraterritorially. The Supreme Court judgement on jurisdiction is a welcome step in making that possible. Although it is significant victory it shows the need for the British government to put in place a fast and cost effective method of redressing violations by its companies abroad.

Now that the Supreme Court has confirmed their permission to have the case tried in the UK the case itself can begin. Serious violating companies like Vedanta can no longer so easily whitewash their reputation and assume a ‘cloak of respectability’ by virtue of a London listing. This is an historic day for victims of British multinational’s abuses worldwide.”

In a further development Vedanta Resources de-listed from the London Stock Exchange on 1st October 2018, amid global protests following the killing of 13 people, shot by police during protests against the company’s copper smelter in Tuticorin, Tamil Nadu, India. Commentators (including Foil Vedanta in their comprehensive report on the company’s global operations entitled ‘Vedanta’s Billions: Regulatory failure, environment and human rights’)[1] claimed the company were fleeing regulation in the UK. However, Vedanta remains liable in the UK for damages arising from the Zambian case.

It is now possible that claimants from some of the many of the Indian communities affected by pollution and human rights abuses by Vedanta may also seek to get justice in the UK.

In April 2016 a High Court ruling granted the claimants jurisdiction to have their case against KCM and Vedanta heard in the UK, citing KCM’s uncertain and opaque finances as one reason they may not be able to get justice in Zambia. The Court of Appeal upheld this verdict in July 2017.[2] (3)

In 2006 a major pollution spill hospitalised hundreds who drank River Kafue water containing 10 x acceptable levels of copper, 770 x manganese and 100 x cobalt. They filed a law suit in 2007 and were awarded a landmark $2 million fine in 2011 in the Zambian High Court, but KCM appealed and in 2015 the Supreme Court upheld the guilty verdict but removed all compensation. See https://www.business-humanrights.org/en/zambia-supreme-court-rules-in-favour-of-claimants-in-water-contamination-lawsuit-does-not-award-compensation-or-order-clean-up-by-konkola-copper-mines

Please see interviews with affected people on CCTV Africa in 2016:

Our detailed article following visits to the communities in 2015 includes scientific reports and testimonies from the victims: http://www.foilvedanta.org/articles/how-kcm-is-killing-the-zambian-copperbelt-part-1-water-pollution/

‘I would be wrong to ignore the possibility that, if the litigation was conducted in Zambia, Vedanta/KCM could seek to strike it out, or if they lost at trial, Vedanta might put KCM into liquidation in order to avoid paying out to the claimants. The history of the U&M case demonstrates that these are possibilities which cannot be ignored.’

The judgment can be downloaded here: http://www.foilvedanta.org/news/zambian-villagers-win-right-to-have-case-against-vedanta-kcm-heard-in-uk/

A full report on the 2017 Court of Appeals hearing can be found here: http://www.foilvedanta.org/news/police-this-gateway-report-on-london-appeal-hearing-of-vedanta-vs-lungowe/