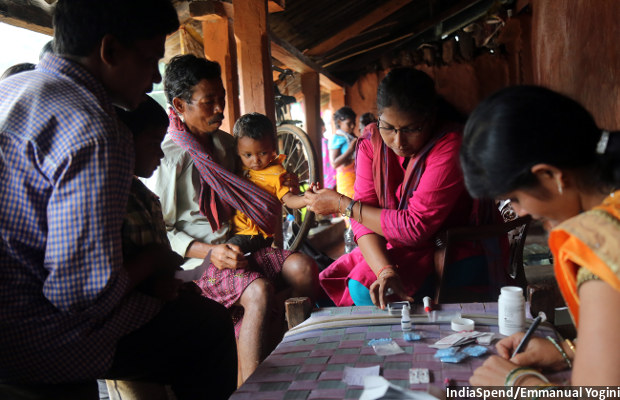 (Thumbnail Image : A health worker collects the blood sample of a child at mass screening for malaria at Budabirmaha, a hamlet in Kandhamal district, Odisha. With Odisha accounting for 41% of India’s 1 million malaria cases in 2016, the success of a new programme is crucial for India’s fight against malaria.)

Kotagarh, Kandhamal: One recent August day, a festive atmosphere enveloped Budabirmaha hamlet in the tribal Kandhamal district of Odisha. The day had started with dancing to the beating of drums as the villagers welcomed their “guests”, health workers who would test them for malaria.

“Whoever tests positive should complete the medicine course without fail,” Salman Mallick, the village’s health volunteer, told the gathering in the local Kui language.

With this, the team set about testing all 189 villagers in the first of two mass screenings to be conducted each year—before and after the monsoon rains–under a joint programme by Tata Trusts and the Government of Odisha that aims to reduce malaria deaths by 100% and malaria incidence by 40% by 2021.

The programme uses a simple, bare-bones strategy–education for prevention, twice-yearly testing, and rapid treatment with a pre-established protocol–all through a local volunteer.

With Odisha accounting for 41% of India’s 1 million malaria cases in 2016, the success of the programme is crucial for India’s fight against malaria.

Remote and cut off

It may not look like a lot, but the screening in Budabirmaha is a minor revolution.

Surrounded by impenetrable forests and hills in what was Naxalite territory until a few years ago, Budabirmaha is one of many tribal villages that seldom get attention from the state authorities. The village has no pucca road, electricity connection or mobile phone coverage.

The nearest health sub-centre, the first point of contact in India’s primary health care system, is eight kilometres away. A redrawing of panchayat lines last year put Budabirmaha under another panchayat, and it has not been assigned an ASHA (accredited social health activist) worker since. Instead, the village has been allocated to another ASHA worker who visits once a month.

Most of the villagers belong to the Kandha tribe and practice sustenance farming, clearing forest land and growing paddy and other crops.

Paddy fields, thick forests and slow-moving streams encourage the breeding of the Anopheles fluviatilis mosquito, and the deadly falciparum malaria is widespread. Kandhamal district, of which the village is a part, has an annual parasite incidence of 38.5, which means approximately 38 people among every 1,000 test positive for the parasite, although not all people who contract the parasite suffer from malaria. With poor access to quality healthcare facilities, most patients go to local quacks and traditional babas for treatment.

Malaria can mean late or wrong treatment, and even death.

This is how 3-year-old Rishi Vardhamaji was diagnosed with malaria even though he had no symptoms–his second bout this year.

Undernourished children are at greater risk of contracting malaria due to poor immunity. If undetected, malaria further lowers their immunity and worsens malnutrition, possibly leading to stunting.

Four of 10 children screened while this reporter was in the village tested positive for malaria.

Although India reported 1 million malaria cases in 2016, malaria has been in decline in India overall, with the number of reported cases falling by 45% from 2000 to 2015.

However, the battle against malaria has made slower gains in Odisha, which recorded the most number of deaths (77) from malaria in 2016.

This is because 86% of Odisha’s malaria cases in 2016 were of Plasmodium falciparum, the deadlier of the two main types of the malaria parasite found in India (the other being Plasmodium vivax). Plasmodium falciparum multiplies rapidly in the blood to cause severe anaemia and clog small blood vessels, potentially leading to cerebral malaria, which is often fatal.

The partnership between Tata Trusts and the state government of Odisha, as we said, aims to reduce the annual parasite incidence to less than 1 in 1,000 population, deaths by 100% and malaria incidence by 40% by 2021.

Targeting 623 of the most inaccessible villages in the state’s three southern districts of Rayagada, Kalahandi and Kandhamal, the programme relies on three simple steps–prevention, timely detection, and rapid treatment.

The experience of Budabirmaha village is instructive. An associate organisation of Tata Trusts, Livolink Foundation, worked closely with the villagers to convince them to nominate a village health volunteer. The villagers chose 25-year-old Salman, who has studied upto grade X and, like many in the village, uses the surname Mallick.

After training in detection and treatment of malaria and malnutrition, as well as schooling in data management by the National Vector Borne Disease Control Program (NVBDCP), Salman became a certified ‘fever treatment depot’ holder.

Armed with a rapid diagnostic kit, a portable device much like a diabetes test kit, Salman tests people for malaria and prescribes medicines–a three-day course for falciparum malaria, 14-day course for vivax malaria, and 15-day course for those with both vivax and falciparum–and follows up to check results. If the treated persons do not get better at the end of the course, he refers them to the government health sub-centre.

Salman, who gets a Rs 1,000 honorarium a month, also conducts twice-weekly meetings to educate the community about malaria symptoms, prevention and treatment.

“It is my dream to make my village a model village,” Salman told IndiaSpend, adding that until a few months ago, the villagers would go to “Bengali babas” and spend Rs 1,000 to Rs 1,500 on “treatment”. Now they get treated free of cost, and there is better awareness about prevention.

Prevention forms a key part of the programme, for which other villagers such as 81-year-old Nielson Mallick have been enlisted. “We had heard about using mosquito nets but never knew how they looked or where to get them,” he said while showing us the long-lasting insecticidal (LLI) nets distributed by the ASHA worker. Nielson’s duty is to ring the church bell at 8 pm every night to remind everyone to use mosquito nets.

Residents have been trained in spraying insecticide to the inside surfaces of homes that serve as mosquito resting places–a technique called indoor residual spraying–and to observe each Friday as “dry day” to empty out all water storage vessels and other possible mosquito breeding spots.

The programme will also try some innovative ideas–on the cards is a portable digital microscope, and a real-time surveillance application that will store information on a cloud that can be accessed from anywhere. It will also conduct two research studies on two genes and their association with malaria.

The state government has used some of the successful strategies from this partnership to start a programme called Durgama Anchalare Malaria Nirakaran, or ‘Eliminating Malaria in Inaccessible Areas’ in 23 districts of Odisha. By July 2017, it had reached some 80 blocks and conducted 2,000 camps, Madan Mohan Pradhan, the Joint Director of Health Services associated with NVBDCP in Odisha, told IndiaSpend.

The strategy of mass screening, indoor residual spraying and use of LLI nets is working, Pradhan said, citing his experience with the community health centre of Malkangiri district: “I saw a drastic reduction of symptomatic and asymptomatic malaria. Where last year the cases diagnosed were six per day, this year there were just two cases a day.”

The article was originally published in www.indiaspend.com on September 16th, 2017 and can be accessed here. 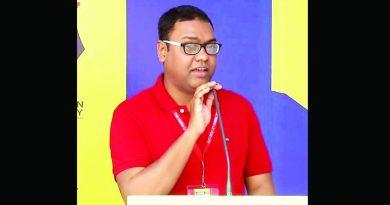 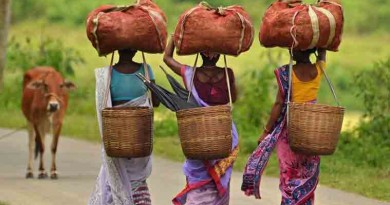 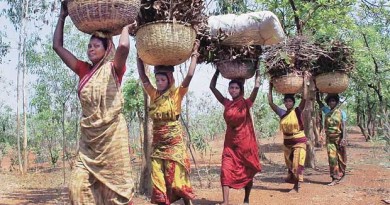