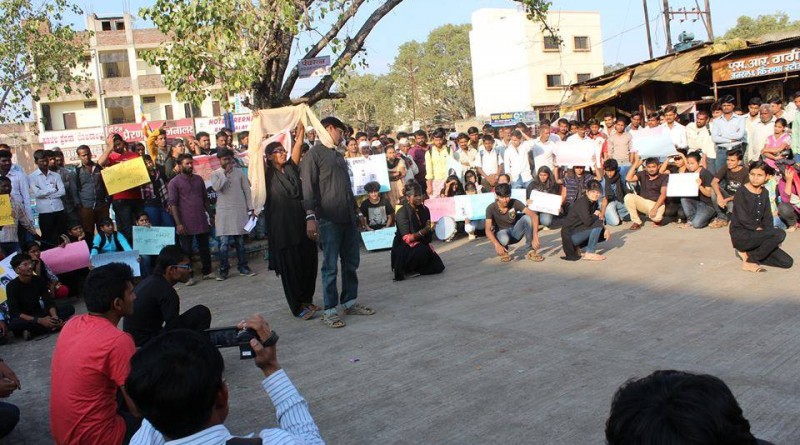 Subject: An urgent appeal for seeking the National Commission for Scheduled Tribes’ intervention in enabling TISS students to avail of the National Fellowship for Higher Education of ST Students (NFST) academic year 2015-16.

We the Scheduled Tribe (ST) M.Phil-PhD research scholars of the Tata Institute of Social Sciences (TISS), across campuses (Mumbai, Tuljapur, Guwahati and Hyderabad) bring to your notice that due to an error by the UGC (since change in the name of the scheme, earlier Rajiv Gandhi National Fellowship for ST Students (RGNF) now National Fellowship for Higher Education of ST Students (NFST)), TISS name is not in list. We have been deprived of applying under the UGC scheme ‘National Fellowship for Higher Education of ST Students’. In the online application form of NFST, the name of Tata Institute of Social Sciences did not appear in the list of eligible universities, due to which, many ST students could not apply and some have applied leaving the Institute name blank in the online application form. As an Adivasi Students, we are eligible to apply under this scheme, but we are being deprived of being considered for the award of the Fellowship.

The online application under the aforesaid Fellowship was opened online on 23rd September 2015 and closed on 23rd November 2015. We have made several efforts on our part as students by calling to the authorities concerned in the UGC requesting them to add the name of our university in the application form but all our efforts have been in vain. An official letter from the Director, Registrar, Deputy Director (Research), Student Union of TISS has gone in the month of November, December, January highlighting this error in the online form, but no action has been taken by the UGC to rectify the error. We would like to highlight the fact that many TISS ‘ST’ students have been awarded this Fellowship in the past years (it was known as the Rajiv Gandhi National Fellowship for SC/ST Students). For the academic session 2015-16 in the same scholarship for OBC, SC, Minority, Disability, Single girl child, TISS name was mentioned and their final selected list had also been declared. But for National Fellowship for ST (NFST) we have been told by the UGC officials that since we do not fall under the 12B and 2F category of Deemed Universities, this Fellowship is not available to TISS students. However, we would like to point out that TISS does not need 12B and 2F certification since we are already certified under Allocation of Business Rules, MHRD, 1967. The TISS is a fully funded Deemed University by the UGC, therefore TISS students should be allowed to apply under this scheme.

Now, our concerns are as follows:

We appeal to your good office to ensure that we are not deprived of our legitimate rights, and request you to kindly look into this issue on as urgent basis.

Here is an attached letter by TISS Director to UGC chairman, mentioning the legal technicalities of the ST Fellowship. 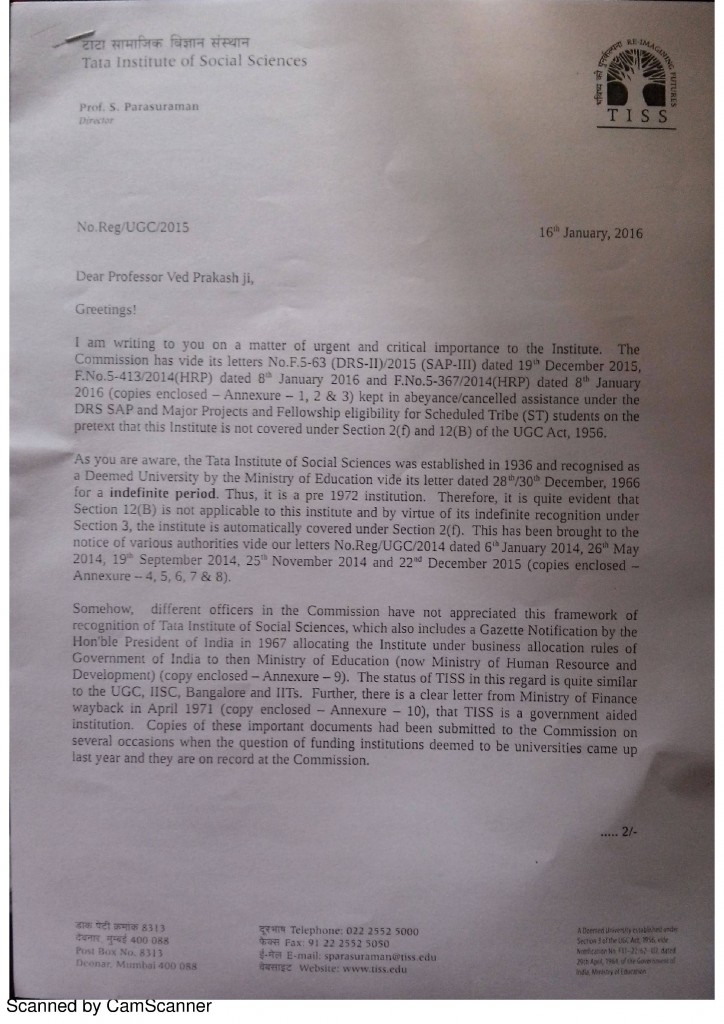 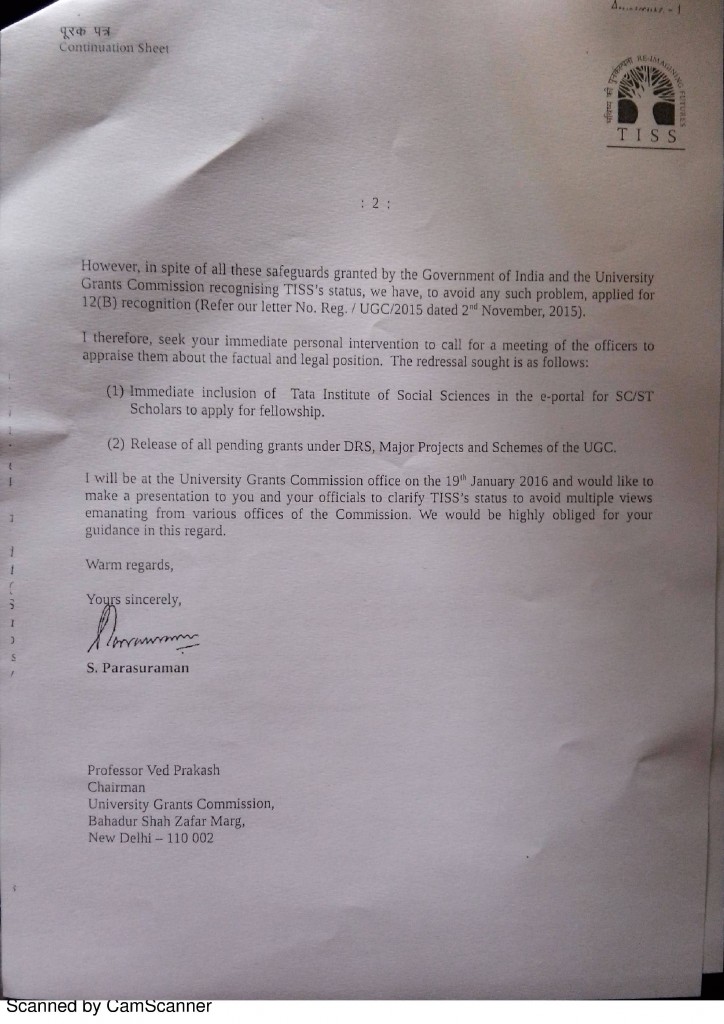 One among this group of students, ‘Priyanka Sandilya’ expressed her disappointment arguing it as an explicit case of discrimination against Adivasis, within framework of law.

In a mail sent to us, she wrote, “On one hand Justice for Rohith movement is ON and on the other hand a silent discrimination with another marginalised section is taking place within the framework of law.It is interesting to see this from the starting the way it progressed. Well I am less shocked here, because I know law is meant only for people belonging to dominating group for centuries (Brahmin, Kshatriya and Vaisya (Baniya) are minuscule and constitutes 10% of India’s population, but they hold power and are rulers). As laws/policy are made by them and made for them. We are just a sufferer. On 17th January, the last voice of that sufferer we heard from a Dalit in HCU campus, now it’s happening with the Adivasis in TISS (Tata Institute of Social Sciences). While in Rohith’s case the system proved him that no doors are open. Here also UGC is perpetuating similar act of discrimination. This year government has decided to repress the Adivasi scholarship in one institute, next year they may enlarge their coverage to another institute and with years it may extend to other marginalised (Dalit, OBC, Minority) sections as well. The politics of victimization and discrimination has been common to us, because we are ‘unwanted’, ‘primitive’, ‘backward’, ‘uncivilized’ for this government and Brahmanical System. They know we get only 7.5% reservation and out of these, very few people come for higher education. They deliberately cut us in the name of merit. They know being a first generation and second generation learners, we need financial as well as academic support. They know we are not united. They know Adivasis are divided into many sub tribes/groups. They know constitutionally Adivasis are termed as Scheduled Tribe but we are fragmented into Indigenous people of north east and Adivasis of mainland. They know some of us have converted to Hindu, Christian, Muslim, Budhhist, and Sarna. Irony is here that, they know Adivasi of mainland, Indigenous of north-east and Dalit rarely come together for an issue. And they are much confident that we won’t come.

They don’t want to see us!

They don’t want us to grow!

They don’t want us to be happy!

They don’t want our voice to be raised!

They don’t want us to be in Higher Education!

They want us to be passive beneficiaries, for their tolerance!!

They want to kill us, our aspiration or want us to commit suicide!!

For rulers we are thread to system, they call us Terrorist, Naxalite and Anti-national!!!” 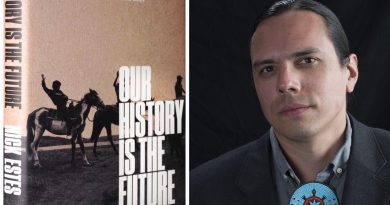 What can we learn from the Indigenous peoples’ movement at Standing Rock? 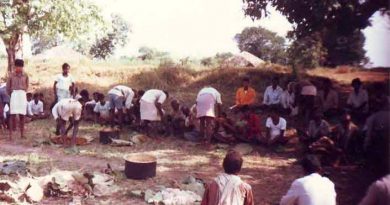 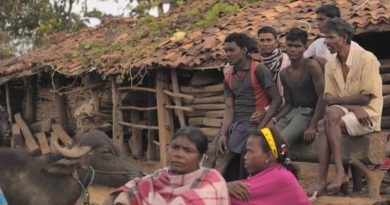